Gamescom dokev - Pearl Abyss has released the first gameplay trailer for DokeV some time ago.
This game, which comes from the same developer as the Black Desert Online game, has attracted the attention of gamers and has received many comments from these circles.

Dokev or "Dokebi" is a game with the nuances of "action adventure open world", where the word Dokebi itself refers to the name of the monsters that live side by side with the people we will meet in the city. 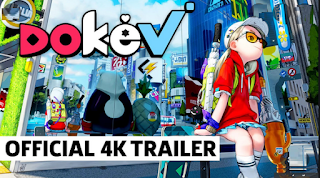 In the gameplay trailer shown, the gameplay from DokeV looks very broken. Filled with very colorful colors and chaos. Coupled with many unique features such as being able to ride a skateboard, bicycle, roller skate, fly with an umbrella, swing and so on.

In the main gameplay, players will fight various evil Dokebi and robot enemies. players will also be equipped with a variety of unique weapons such as a hammer that can grow and shrink and a vacuum cleaner.

For the release date, Pearls Abyss has not provided further information regarding this matter. But based on some sources, they will release it next year, 2022. DokeV can be played through the PlayStation 4, Xbox One, and Microsoft Windows platforms.

Of course, the release of this one game is eagerly awaited by gamers who have fallen in love at the first sight of yesterday's DokeV Gameplay trailer