How to run faster fortnite -  To run in Fortnite simply move the stick forward, in the case of consoles or hold Shift on the computer while walking, but some players are not content with little and created another method to gain momentum and run faster in Fortnite, understand how it works.

How to run faster in Fortnite

The tip is to use the construction to gain a boost when jumping and thus have a time advantage when compared to the traditional running method. 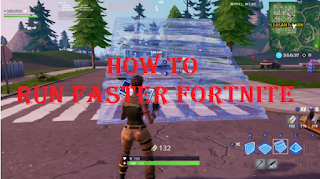 The only thing you will need is material and a straight line.
The method consists of:

Thus, with the build always staying above the character, a small boost is generated when he reaches its limit, reaching the ground more quickly.

The method is practically imperceptible for those who use it, but if compared side by side with the natural running process, you can see that you gain a few seconds (or thousandths of a second) of advantage.

Although not practical, because it limits vision and requires coordination and equipment, it can be useful when you're running away from an opponent, especially if he's chasing you with a machine gun or when you want to get out of the storm area right away.

As soon as the enemy knocks down one of the ramps to shoot you, another one will have already been built and so on.

The same is not true when chasing other players, precisely because it limits the view when aiming down to position the ramp above your character. In other cases, it's worth using propulsion items or even vehicles to get to goals faster.