Where to find the new monster in fortnite -  Season 1 has been packed with content. From a new map to the introduction of Shield Kegs and more, there's something for everyone. It seems that Epic Games is not slowing down by making more additions to the Battle Royale. The latest Fortnite update has reintroduced the fan-favorite Tilted Towers point of interest and debuted monsters. 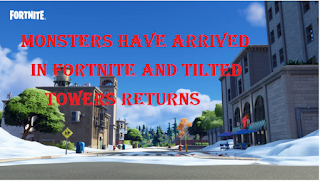 A new creature called Klombos has made himself at home on the island. According to Epic Games, he is friendly unless you decide to provoke him. You can approach a Klombos and climb its tail to get to the nostril on its head. You will then be thrown into the air, which can come in handy when turning to the next circle or trying to escape a sticky situation.

Also Read: How to find a grenade launcher in Fortnite

These monsters love to eat, and will eat almost anything you put in front of them. However, her favorite food is apparently Klomberries. They can be picked up from bushes, and all you have to do is throw a berry near the Klombos to calm them down or guide them on your way. After the monster feeds on a snack, they will sneeze out other items for you to collect.

Tilted Towers is back in Fortnite

The snow on the island continues to melt and you have finally discovered Tilted Towers. The point of interest is back to give longtime fans a hit of nostalgia. Also, the Grenade Launcher has returned from the vault and you can find it in rare chests, supply drops, and sharks.

However, the explosive weapon has been modified since it last appeared in the game. When you fire a projectile, it will now explode after its first ricochet, shooting more directly at your opponent.

With monsters and the return of Tilted Towers, the possibilities in Fortnite are seemingly endless.