LEGO Brawls -   Red Games has announced that it is bringing its LEGO Brawls fighting game to PC and consoles, including PS5 and PS4. The 4v4 multiplayer game, previously exclusive to Apple Arcade, will launch on all new platforms this summer. 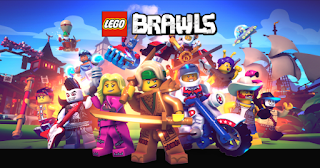 LEGO Brawls, What is this?

LEGO Brawls is a Super Smash Bros.-themed 4v4 fighting game in which players can create their own minifigure fighters using parts from many different LEGO series, such as Pirates, Space and Castle, as well as licensed brands such as Jurassic World. . These minifigures then battle through a total of eight multi-level stages based on familiar LEGO themes.

" Players can show Emperor Unagami who's boss in LEGO® NINJAGO® Prime Empire, master the powers of water in LEGO NINJAGO Seabound, and practice Spinjitzu (disguised as a chicken) in LEGO NINJAGO Legacy. They'll launch their minifigures into action from the ship's cannons in the pirate level and have a wild west showdown. You can fight for control of the space mining post on Blacktron as the LEGO® Monkie Kid™ summons ancient powers, defends his honor in the castle in a Minotaur suit, and pilots a UFO through a chaotic invasion in Alien Conquest.

Also Read: How to play split screen on fortnite xbox one

As players level up, they can earn more brick-built minifigures, costumes, weapons, emotes, and power-ups. One of those power-ups featured in the trailer above is a giant robot. The goal of the 4v4 main game mode is to control half of each level until your team's color meter is full. In party mode, players can compete against opponents alone or with friends.

In other news, Gravity Rush director Keiichiro Toyama has said that he would like Sony to bring the franchise to PC so it can reach new audiences. Elsewhere, a free online multiplayer weekend will allow all players to try out multiplayer modes in their games over the weekend starting February 12.

Also Read: How To appear offline on Xbox One