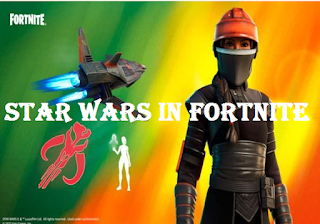 If we already had the famous bounty hunter, now it is the turn of Fennec Shand and Krrsantan, two characters who played an important role in said series.

If you are thinking of acquiring them, there is good news, because these characters are available in the in-game store, but yes, as with other collaborations, they do have a price, in the form of V-Bucks (V-Bucks).

In Fennec Shand's case, she arrived with the Seal of the Mythosaur backpack, the planned Fennec Ship, and the "the way it is" emote. For her part, Krrsantan arrived at the store with the “Hutt Clan Symbol” backpack.

How much do both skins cost?

The skins are part of the "Reward Hunter" lot that are sold for 2,300 V-Bucks. Each separate outfit will cost you 1,500 coins, while the planned outfit and emote for FENNEC sell for 800 and 200 V-Bucks, respectively.

That's not all, as Boba Fett has returned to the store for a limited time, and you'll be able to get not only his suit, but also his important accessories like the Z-6 rocket pack, the Gaffi Rod pickaxe, the planned Boba Fett Starship and the Online Target Computer emote.

Remember that these packages are only available for a limited time, so you should hurry up if you don't want to miss out on the opportunity to continue honoring the Star Wars saga, and especially The Book of Boba Fett, which ended its first season this week. .

Now, we can only wait for the premiere of Obi-Wan Kenobi in March, which promises to continue to maintain the George Lucas saga at a very high quality.