Fortnite zero build permanent - Fortnite users will now be able to enjoy Zero Build mode permanently. In this new mode, which until now was temporary, it is possible to jump into the game without the need to build structures and with an additional shield that recharges.

Instead of crafting buildings, players will now be able to climb on buildings and use zip lines. This will allow surprise attacks and more exciting missions given the possibility of facing enemies "head to head" without the need to spend time building different structures for defense and attack. 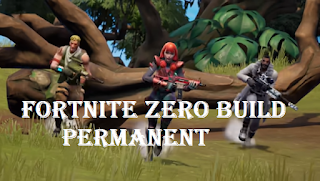 This modality, which is available for all options, including solo, duos, trios and squads, seeks to give this, which is one of the most downloaded video games, greater agility. An option that many of its users had requested and one of the most recurring complaints in the game.

The Zero Build mode brings Fortnite closer to other traditional shooting games, such as Halo, in which users depend only on their weapons and the objects on the screen to overcome their enemies.

Also Read: Mantle in fortnite, how to mantle 5 times in 5 seconds fortnite

However, it is still possible to find the title in its traditional mode for those who find more playability in the construction of structures, despite the fact that this modifies the rhythm of the game.

Epic Games made the decision to open the Zero Build option, after without warning, they disabled the ability to build and many of their players immediately adapted and celebrated the new version.

Another surprise for users is that they will be able to get the Aborted Plans loading screen for free, just by logging into the game.

Now it is expected to know if this modality can open a new segment in official Fortnite competitions and tournaments, along with the classic Battle Royale and the creative mode.