Neymar jr fortnite - Like playing Fortnite games? Or a fan of Neymar Jr. who currently plays for the club Paris St. Germany? If you both answer yes, you will definitely be very happy to hear the news that Fortnite will collaborate with Neymar in Season 6! 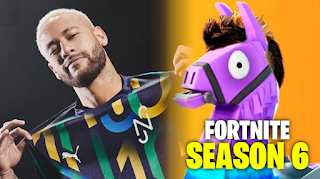 Through its official Twitter, Epic Games as the developer from Fortnite uploaded a video footage showing Neymar's jersey number 10. In addition, an image of a ball that looks like the ball used at the 2018 Brazil World Cup also appears.

Interestingly, the Brazilian star retweeted the video with an eye emoji, indicating that there was indeed something between the two of them. Unfortunately, there are no further details regarding this collaboration.

Will Neymar's skin have certain abilities? Until this article was written, there was no related confirmation. It's just that if you want to theorize, the teaser video shows a creature that resembles a werewolf. Can Neymar make a transformation? Can be.

This is not the first time the world of Fortnite and football has “collided” with each other. Previously, Epic Games had introduced skins for another Brazilian soccer legend, Pele, along with the jersey of 23 football clubs such as Manchester City, Inter Milan, Celtic FC, and others. Fortnite also held a soccer event.

Nyemar is known to have played Fortnite games, and has even played with professional players like Ninja in the past. It's interesting to see if the collaboration between the two really happens in Season 6.

As one of the most popular battle royale games in the world, Fortnite always presents something new and unique in every season. This makes them have loyal players who are always looking forward to the latest updates.

Also read: How do you compete in the Aloy Cup Fortnite?

Fortnite Season 6 itself will arrive on Tuesday, March 16, 2021. The main plot of this season is that all interdimensional realities will collapse and we must prevent him as Agent Jonesy. The official title of this mission is Zero Crisis Finale.