Where are All Ferrari locations in Fortnite -  Vehicles play an important role in Fortnite. Players operate to rotate around the island, evade impending storms, and flee from enemy ambushes. Ever since vehicles were added to the island, players have been using them to march towards Victory Royale. 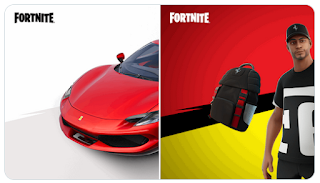 Recently, Epic Games collaborated with popular automaker Ferrari on the launch of the new Ferrari 296 GTB in Fortnite Season 7. Ever since the supercar was added, gamers have been eager to find out where they spawn on the island.

Epic Games Collaboration Events are a treat for players. Popular collaborations in the past rewarded players with cosmetics and other in-game items. However, the recent Ferrari collaboration is different, as it brought several Ferrari 296 GTBs to the island.

The first Ferrari 296 GTB location in Fortnite Season 7 is Retail Row. Players will need to navigate to the southwestern part of the POI. In this place, there is a small house with a garage that houses the red supercar.

There are two Ferrari 296 GTBs at this location.
The first is available on the northwest side, next to the garage of a small house. In the western part of the POI, there is a gas station and the second Ferrari appears near it in Fortnite Season 7.

The third point of appearance of the coveted Ferrari 296 GTB is the Misty Meadow POI. Players can find the sports car on the left side of the location, next to the tall building.

There is a bridge located between Misty Meadows and Slurry Swamp. Players rarely use this nameless bridge, but they can find one of the Ferrari 296 GTBs at this location in Fortnite Season 7.

The final location of the Ferrari 296 GTB is near Holly Hatchery. In fact, players will have to travel west from this location to grab the coveted sports car.

There is a small garage-like structure to the left of Holly Hatchery where the Ferrari 296 GTB is spawned.

Players should note that since the Ferrari 296 GTB is in high demand, many others are expected to fall for these points of interest. Therefore, loopers should carry proper weapons and ammunition just to be safe.