How to Get Skins Superman and Clark Kent in fortnite - If you had to choose a superhero to save the island of Fortnite from the alien invasion, there would be no question about who to summon. That's why fans of the Epic Games battle royale and the DC comic should be happy for the arrival of Superman to Fortnite, which is available today. 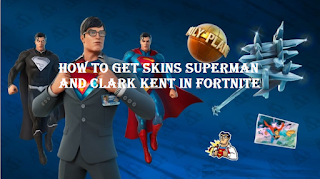 To become Superman in Fortnite, you will have to fulfill some missions of the current Battle Pass, which will allow you to unlock different objects until you become the superhero. Along the way is the Clark Kent outfit and the Secret Identity Gesture, with which he becomes Superman.

Also read: How to get toxic rick in fortnite

How to get skins Superman in Fortnite

That said, to get the Superman skin in Fortnite you will have to complete missions. Here is the step by step:

Time to help figure out what happened to Clark Kent's memories. Unlock the Call to Action emoticon.

Clark Kent remembered that he is Clark Kent ... and Superman! Unlock the Clark Kent outfit.

His powers returned, thanks to his help. Go to a phone booth and dress for the occasion!

This last mission unlocks the built-in Secret Identity emote, which is the one that transforms Clark Kent into Superman and vice versa.

But becoming Superman is not all, there are also several more themed rewards that can be obtained by completing a number of epic missions in Chapter 2 - Season 7. These include the alternate style Shadow for Clark Kent, Superman and accessories of the set.

Also read: The Batman Who Laughs skin looks like in Batman fortnite foundation

These are, in order, the Superman rewards that can be unlocked: