How to get berserker medal cod mobile -  Call Of Duty Mobile (CODM) is a free shooter game released that has seen one of the biggest mobile game releases ever. The game has a large number of weapons and features that all players would like. In addition to weapons and missions, there are more than 80 medals that players can unlock and earn rewards. The Berserker medal in CODM is also one of the medals that can be unlocked by completing a few simple tasks. 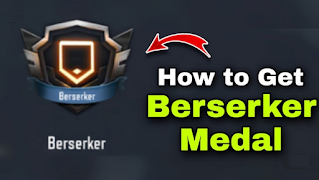 If you are new to the game and looking for ways to get the Berserker medal in CODM, then you are in the right place. Here is a step by step guide for you to get the medal in the game.

Also Read: Where to find and kill Elves in Call of Duty Warzone

How to earn the Berserker medal in CODM?

Of these more than 80 medals, half of them can be unlocked simply by playing multiplayer. All these medals are divided into five different types of kill, Killstreak, Scorestreak, Misc, Zombie. Berserker medals are included in the Killstreak medal types.

The Berserker medal can be easily earned by playing multiplayer. All players are required to get three kills in the single multiplayer match to earn a CODM berserker medal. It is one of the easiest medals to obtain in the game. You can collect it a certain number of times to get weapons and items in the game.

Tips and tricks to unlock the Berserker medal:

It is not that difficult to get three kills in a multiplayer game. Still, we have made a list of some tips and tricks that may be useful to all players who are new to the game.

Play a game with your friends Equip yourself with the best weapons Avoid unnecessary attacks Hide behind objects instead of attacking from the front.

This is everything you need to know about the Berserker medal in CODM. If you want to know all the different medals in Call Of Duty Mobile, click on the link and know each one of them.