Mythical weapon in Fortnite - The third chapter of Fortnite has just started and it came with a battle pass. From Spider-Man to The Rock, playing The Foundation, players will be able to unlock a ton of skins with the Season's Battle Pass.

Spider Man also comes with some of the items from his hometown with him. You can find the Daily Bugle building on the map and move around like Spider-Man does in New York. 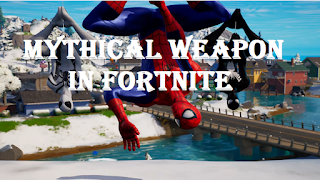 However, to start throwing webs, you will have to get Spider Man's mythical weapon called the Web Thrower.

Also Read: How to do trickshots in fortnite

Where to find Spider Man mythical weapon in Fortnite

According to Epic's release schedule, Spider-Man's Web Throwers shouldn't be in Fortnite right now. The Mythic Weapon's release was scheduled for December 11, but some players already collected the Spider Thrower prior to its debut.

Although it is unknown if that is a mistake or a nice surprise for fans, this is where you can get a pair of Spider Throwers in Fortnite.

Spider Throwers can be equipped with all skins in the game and it may take a bit of practice before you start swinging without downtime. When you miss a shot, the Web Throwers will go on a cooldown, preventing you from performing consecutive swings in most cases. Swinging through buildings feels quite natural and enjoyable, so many players will try to implement this new weapon in high-level games.