It has been almost two weeks since the launch of the third chapter in Fortnite, and many players are still confused with the location. Players are now eligible to open exciting gifts every day from the Cozy Lodge, including skins, gliders, emotes, and more. 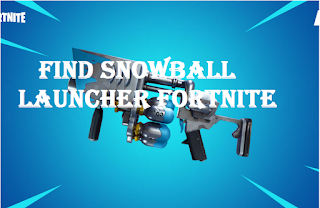 There are also several challenges that you can complete every day that will help you increase your XP points in the game. Each day, a new challenge is introduced to the game, releasing at approximately 9 a.m. ET. Players can make use of a back bling and glider after completing every seven to ten challenges.

Also Read: How to get snowball launcher in Fortnite

Where to find snowball launcher

Why is the snowball launcher so special?

Many global players are also reporting that the spawn rate of this challenge is quite low compared to other challenges released by Epic Games. But once you hold the grip of the snowball launcher, it is quite easy to complete the challenge as the weapon is quite powerful and deals a lot of damage to the opponent.  That was everything you needed to know about the Snowball Launcher location in Fortnite Chapter 3.