Guy from fortnite nfl - Before Super Bowl LVI kicked off last night between the Cincinnati Bengals and Los Angeles Rams, Dwayne "The Rock" Johnson appeared at midfield to introduce both teams and liven up the ensuing matchup. 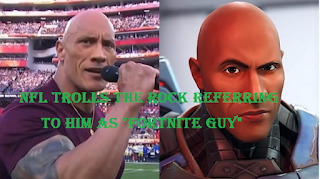 The moment saw The Rock essentially cutting a promo for each team using some of his classic catchphrases that he coined during his time with WWE. And while this intro was loved by several fans watching the game, the NFL decided to use it as a way to troll The Rock afterward.

In uploading this introductory clip to the official NFL YouTube channel, those in charge of the National Football League's social media team chose not to put The Rock's name in the title. Instead, he simply referred to him as the "Fortnite Guy" giving "The most electrifying intro in Super Bowl history."

This title was clearly intended to poke fun at The Rock's recent involvement in Fortnite which sees him playing the character known as The Foundation. In late 2021 when Fortnite Chapter 3 kicked off, The Rock was confirmed to be playing The Foundation after fan theories surrounding this reveal ran for months.

Unsurprisingly, fans really loved that the NFL titled the video this way and were quick to play along with the joke in the comments. "I can't believe they made the Fortnite Rock into a real person so quickly! It just came out a week ago," one of the top comments on the video said, referring to the recent release of The Foundation in Fortnite earlier this month. “Whoever is running this account needs a raise ASAP,” another comment continued.

At this time, The Rock himself has not responded to the NFL having fun with him in this way, but expressed that making the presentation meant a lot to him. “My dream for a long time was to have a career in the NFL and win a Super Bowl. I failed at that.

But last night my dream came true in a different way," he said on Twitter when discussing the opening segment. Thank you NFL players/coaches for the incredible love and trust. Thank you [you] fans for the crazy positive energy."