After the last crossover, with stars like The Rock, Bruno Mars, and Anderson Paak, Fortnite seems ready to welcome another one. But it probably won’t come as a surprise to some for the Naughty Dog’s creation to set foot in one of the most famous battle royale games! 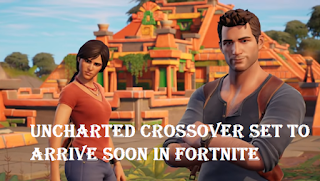 We’ve compiled a complete list of everything you should know, including the release date, skins, and more.

Also Read: Fortnite lovely, How to get the Scepter of Hearts pickaxe for free in Fortnite

The Uncharted Crossover is set to arrive soon. Epic Games didn’t offer any details yet, but we should expect more information next week.

The crossover might air on Thursday, February 17. However, Epic didn’t confirm a thing, so it’s better to take everything with a pinch of salt!

Also, we can expect details such as the price of the bundle and the skins to be revealed next week.

According to leaks, the Fortnite x Uncharted crossover could bring multiple skins for many characters, including Tom Holland’s Nathan Drake. And that’s not all!

Nathan Drake’s skin, for example, could feature two sleek styles, while Chloe Frazer could come with three styles. How cool is that?