How to mark alien parasite fortnite -  Many Fortnite players are struggling through the legendary and epic missions of Season 7, Week 11. These not only provide a nice escape from the typical Fortnite Battle Royale gaming experience, but they also give players plenty of XP to Unlock Battle Stars for the Battle Pass.

One of this week's missions involves players finding an alien parasite and then marking it, and fans can use this guide to complete the challenge quickly and easily.

Also Read: Fortnite symbiotes clash, Where is Mythic Venom & Carnage in Fortnite and where to find the Symbiote? 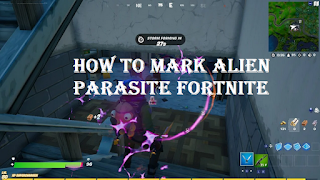 What are alien parasites in Fortnite?

Alien Parasites were recently added to Fortnite Season 7 and can be found in various places on the map. The Alien parasites can infect both animals and humans. and it can offer players some useful mobility improvements.

When a parasite attaches itself to a Fortnite player, they will lose some of their maximum health, but that negative will be traded for two positives: faster running speed and a higher jump. If a player wants to eliminate a parasite from the person of him, he only needs to touch the fire, get into a body of water or another player can shoot him from the head of a player.

How To find alien parasites fortnite

As soon as players jump off the Battle Bus, they need to head to the Durr Burger restaurant landmark south of Holly Hatchery (formerly known as the popular point of interest, Holly Hedges). If players head inside the restaurant, they should see a staircase behind the kitchen. Head down and players should find some alien parasites flying, or at least some alien eggs that haven't hatched yet.

How To flag an alien parasite in Fortnite

Also read : How to get carnage mythic in fortnite

As for Fortnite players on PC that are not using a traditional console controller, they will need to go into settings to see which key on the keyboard uses the item markup feature.
Fortnite is currently a free game on PC, PS4, PS5, Switch, Xbox One, and Xbox Series X / S.