Where Monarch pack tokens in Fortnite - The first week of Fortnite Monarch Pack missions is here, which rewards us with the "Shattered Wings" accessory. Epic has introduced a new mode of purchase packages in which you can complete a series of missions to level up and unlock rewards within said package. This is the case of this Monarca package that consists of 28 levels. Today we explain how to unlock the rewards of the first week. 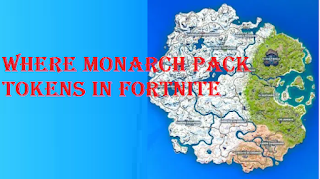 Obviously to have these missions available we will need to buy the Monarch package in the store for 1200 V-Bucks. Once obtained, we will have to find seven tokens scattered around the map to unlock the weekly Fortnite accessory.

Also Read: How to find drakes map in fortnite

Where to find Monarch pack tokens in Fortnite

Here are the locations of the tokens:

To get them you just have to enter a Battle Royale game and go to the different locations. As soon as you get all the tokens you will get this week's item. The items included in the package are the following:

Also say that every time we get a mission from the package, we also receive a full level of the Battle Pass, so we can go up to 28 levels thanks to this package.