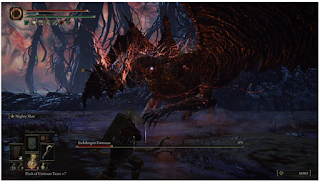 Note that this is an optional boss and you don't need to beat it to win the game. It's worth mentioning that you need to beat the boss to complete Fia's questline and unlock the "Age of Duskborn" ending in the Elden Ring. You can find the Lichdragon Fortissax Deeproot Depths boss.

Like all other bosses in the game, you should take your time and take note of the attacks the boss can use. Be aware of the attack pattern to avoid taking damage and find windows of opportunity to deal damage to the boss. In addition to lightning attacks, the boss can use his legs to attack you and hit you with his wings. Finally, he can also use fire attacks against you.

The most devastating attack is when the boss flies into the air and then lunges at you. This attack is quite fast and can be very difficult to dodge if you don't see it coming. Note that the dragon stays in the air for a couple of seconds so you can be ready to dodge when it attacks again.

As it is a large beast, its attacks are slow and you will see them coming. This makes them easy to dodge. We recommend attacking the hind legs and tail of the dragon. Weapons like the Moonlight Greatsword are going to go a long way. We also recommend the Darkmoon Greatsword.

We recommend not to be too arrogant. This encounter will require some patience and you should not be too aggressive. Take your time and deplete the boss's HP bar.

Here's what you need to know to beat the Lichdragon Fortissax boss in the Elden Ring.

Also Read: How to use great rune elden ring