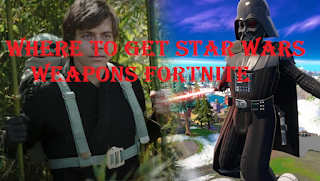 Where to find the E-11 Blaster rifle in Fortnite 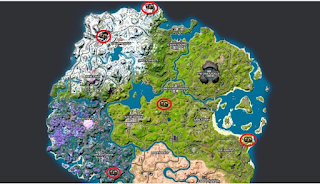 The E-11 Blaster rifle is a legendary Star Wars assault rifle and the weapon of choice for Stormtroopers loyal to Fortnite Darth Vader. Not to be confused with the First Order Blaster Rifle, E-11 Blaster Rifles have a faster reload time and rate of fire. The Star Wars E-11 blaster rifle deals moderate damage but lacks accuracy.

E-11 blaster rifles are exclusive to Star Wars chests. These special all-black chests are available inside the white tents in Star Wars Imperial Docking Bays around the island. In total, there are five different locations where you can find Star Wars chests. Below is a list of all the Imperial docking bays and where to find them:

Where is darth vader lightsaber in fortnite

In each match, iconic Star Wars villain, Darth Vader, will descend on the island via his Lambda-class starship. Darth Vader will dock in a different Imperial Docking Bay each match, so you'll need to keep an eye on where he lands.

Where to find Luke Skywalker lightsaber in Fortnite

Luke Skywalker, one of the classic Star Wars protagonists, is rumored to be coming to Fortnite later this season. If that's the case, there's no doubt that Luke Skywalker's lightsaber will be available to players. We will update this guide as more information about Luke Skywalker and his lightsaber is revealed.

Also Read: What is whiplash in Fortnite? read here