is breaking bad in fortnite - Fortnite has long been one of the most played video games by users. One of the things that has delighted fans the most is the different collaborations he has done with animated series or movies. Now, many fans are talking about a possible crossover between the video game and 'Breaking bad'.

The theory has been circulating on social networks that Walter White and Jesse Pinkman, protagonists of the legendary series, will arrive at Fortnite. Fans have seen some details that have attracted attention and would confirm these rumors. For example, they have found a caravan on the island, in the middle of the desert, with two chairs outside of it, which is very reminiscent of 'Breaking Bad'. 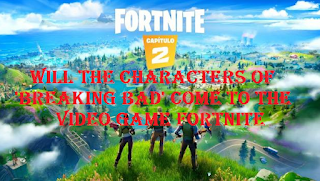 That's not all, inside the vehicle there are two beds, a couple of armchairs and a television, very similar to the place where Walter White and Jesse Pinkman produced methamphetamine. Although everything is very suspicious, nothing is confirmed yet. Important insiders such as HYPEX, iFireMonkey or Shiina have not commented on the matter.

Also Read: Fortnite shadow bomb challenge, All Shadow of Phantasm missions in Fortnite and how to complete them

This is not the first time that a possible collaboration between Fortnite and 'Breaking Bad' has been suspected. Let us remember that other important animated series such as 'Dragol Ball' and 'Naruto' have previously collaborated with the video game. We can only wait and be attentive to social networks.

HOW CAN YOU GET ALL 7 DRAGON BALLS FORTNITE ?

Epic Games, an American video game developer company, added a way to obtain the dragon balls. To get it, you must look in the menu for a new tab called "Unleashed Power", where we will find challenges inspired by Dragon Ball Super, which you must complete if you want to get a dragon ball.

Also Read: Where to find aliens in fortnite

“Seven sets of missions will test your skills in strength, agility, concentration and much more. With each training set you complete you will earn a Dragon Ball and increase your power level, unlocking awesome rewards like the Dragon Radar Back Bling, emotes, sprays, and Battle Pass tiers.