We're still two weeks away from the launch of the new Fortnite season, Chapter 2 Season 7. We still have two weeks of challenge left for players to gain as much XP as possible before the end of the season. There are also three “Hardwood” NBA Creative Challenges that will give players 50,000 XP each season 6 xp.

In today's update, Epic Games is also updating the Omen mission which was originally added to the archive in the v16.40 update two weeks ago. Two of these challenges will be launched at 3 pm. BST (10 a.m. ET) and will give players 24,000 each season 6 xp. There are a total of five Omen missions, and we hope that the other three challenges will launch in the next three days of the week. 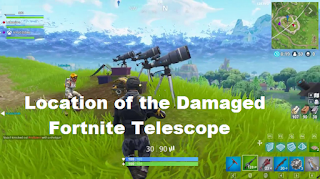 Location oF the Damaged Fortnite Telescope

There are several broken telescopes you can find around the Fortnite map. One of them can be found west of Craggy Cliffs in a location exactly as shown below. There is another broken telescope southeast of Retail Row:

Also Read: Where To Destroy spooky tv sets in fortnite