How To Tame Axolotls in minecraft -   sAxolotls have been added to Minecraft in the Caves & Cliffs: Part I update, and players are wondering if they can tame these new animals. Axolotls are unique to Minecraft as the first amphibious creature introduced to the game, which means that they behave differently from other animals. This could leave some people scratching their heads over whether an Axolotl can be tamed or not.

Can you tame axolotls in Minecraft?

Unfortunately, Axolotls cannot be tamed in Minecraft. These creatures work a little differently than others we've seen so far. They are amphibians, which means that they reproduce in water, but can survive for a limited time on land.

This means that although players cannot tame them, they can be lured out of the water by moving on land. However, after a few minutes out of the water, they begin to break down until they rehydrate. 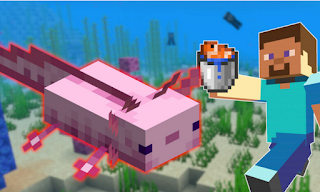 Axolotls can be transported in two ways:
Luring them with Buckets of Tropical Fish or collecting them in a bucket.

Axolotl in Minecraft also has some peculiar traits that set it apart from other mobs. They are passive against players, but will attack all water mobs except turtles and dolphins (giving priority to hostile mobs). Suppose the player kills a mob with which an Axolotl is in combat. In that case, he will grant them Regeneration I and remove mining fatigue. When Axolotl is attacked underwater, he has a chance to play dead for 10 seconds. When played dead, Axolotl gains Regeneration I, and hostile mobs will ignore them.

Also read : How To Make Spyglass in Minecraft

Axolotls Minecraft locations
To find Axolotls in Minecraft, players must search the water with blocks on top (especially caves). They should be relatively common after the recent update, and players shouldn't have a hard time finding them. They are likely to artificially influence the environment to make them more likely to breed. However, we haven't had a chance to experiment with that yet.