How To Make Shears Minecraft - Tools are an incredibly important part of the Minecraft game. Players need items like Minecraft's ultimate pickaxe, swords, and fishing rods in order to mine minerals, capture food, and craft everything in the game. One of these tools that can be difficult to remember how to do is scissors. 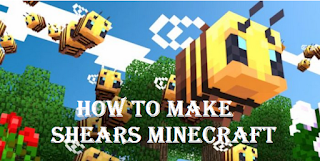 In Minecraft, players will have to craft shears to perform various tasks. They are used for shearing sheep's wool, but they also have other uses in the game.

Also Read: How to get Honeycomb in minecraft

Shears are also used to break blocks in Minecraft, including collecting blocks from:

How to make scissors or shears in Minecraft

To make shears in Minecraft, players only need some iron ingots. Iron is everywhere under the ground, so players most likely have everything they need to make it out there. Melt the iron in a Minecraft furnace or blast furnace until there are two iron ingots. Combine the two to make shears. Players can also find shears sold by the merchant for 2 emeralds on occasion, and they can be found as loot in the shepherds' chests.

Players can also enchant their scissors to make them even more durable or useful with these enchantments.

Also Read: How To Make Spyglass in Minecraft

How to use shears in Minecraft

Shears are used like any other tool in Minecraft. Players simply walk up to the sheep, block, tripwire, or whatever else they want to interact with and hit the use button. The use button will vary depending on the console or platform the player is using.