How To Hidden History of Fortnite - Did you know that the world of Fortnite keeps a hidden history where everything is connected? Every event that occurs has a consequence in the future, and that is what we are going to see today. The full story, from the beginning to the present.

It all begins on Athena Island. There people fought day by day and some began to use armor to win the fighting, until one day several meteorites fell. The island government began a deep investigation into the main meteorite, and a curious thing happened: someone came out of it.. 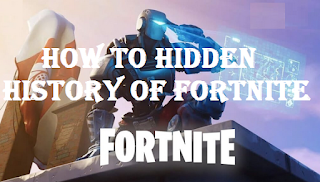 This visitor had some things to do on the island, so he stole a rocket from a building and made it work with some stones belonging to the meteorites. When the rocket went up, he sent some messages somewhere. Then he plummeted and teleported.

Also Read: How To Get Skin Thanos in Fortnite

Before leaving, the sky broke and little by little things were disappearing. The rift closed and launched a lightning bolt that created a huge cube. This cube traveled the ground leaving marks until it reached an island where it melted into the water. After completely melting the island began to rise and move around the map. It caused a blast wave and created zombies. For the first time the inhabitants of the island had a different enemy. However, they were able against them, but the peace would not last for long ...

Some time later, The Ice King appeared with an army. He cast a spell that froze the entire island and sent the zombies back, but this time with ice armor. This king let his greatest enemy escape: The King of Fire. He was in charge of causing earthquakes and pulling a volcano from the bottom of the earth.

With all this that had happened, many objects were disappearing for no reason. The government wanted an explanation and began investigating. They dug into the lake, where the bucket melted, and found some doors. To open them, you had to insert stones that functioned as special keys.

The government succeeded and discovered a portal to the dimension of the Nexus. There were weapons and a very large energy sphere that would soon become the protagonist of this story. When they returned to the island, things had changed. The volcano erupted and it seemed to be the end of everything! Jonesy was smart and took refuge, but he got locked up and spent several years alone… when he managed to get out he was amazed at what he saw: a futuristic city.

The volcano did not end the island thanks to a guardian, known as Solidaridad, who helped the inhabitants and made them advance technologically. Her contribution was so important that they built a statue in her honor. However, things kept going bad. This story is very long! We do not want to leave you wanting to know more, but we will tell you that then there is an epic battle, an interesting plot of time travel and seven scientists, the confrontation between E.G.O vs. A.L.T.E.R, the mighty Midas and his plan to finish the island, the arrival of Thor ...

Also Read: Where To Find Gold Bars in Fortnite

If you consider yourself a true Fortnite fan, you have to know its entire history, from the beginning to the present. We summarize the principle, now you have to know the rest by watching the video below. Trust us, the best part starts now.