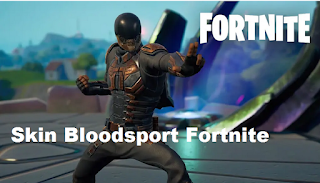 Epic Games partnered with DC to preview the skin ahead of its release. Idris Elba, who plays Bloodsport in the film, appeared in the trailer to introduce his character. The Bloodsport Fortnite skin is an identical copy of the character that appears in the movie.

Also Read: How to get armored Batman and Rebirth Harley Quinn masks

How to get the Bloodsport skin in fortnite

Players will not be able to get the Bloodsport Fortnite skin until August 3. Epic Games has announced that this is when the skin will be released in the Item Shop. The store will restart at 8pm EST, and the mask will likely stay in store for a few days.

We don't know the details of how much Bloodsport will cost, but we can assume it will cost around 1,500 V-Bucks. The trailer also shows him wielding a pickaxe and wearing a Back Bling that is part of his set. These could also be sold as a bundle for around 2,200 V-Bucks.

So the only way to get the Bloodsport Fortnite skin is by purchasing it with V-Bucks. Fortnite has not announced any special tournament that rewards the best players with the skin. It's safe to assume they won't have one this time.

As for The Suicide Squad, the film opens in theaters on August 6. This means that players can get a taste of the action three days before the release of the movie. Teaming up with Harley Quinn will make players feel like they're in the movie. Stay tuned as more information is released on the Bloodsport skin.