How to be imposter in among us - Everyone will probably agree: playing as the impostor is without a doubt one of the best moments in the game! In Among Us, players are randomly assigned one of two roles: a teammate or an imposter. All players have an equal chance of becoming imposters, which means a 10% chance in a 10-player game, for example.

However, there is a way to play as an imposter at any time in a free play mode where you can practice your cunning sabotage skills.

Also Read : How to Change Name Among Us on a smartphone or laptop [Work] 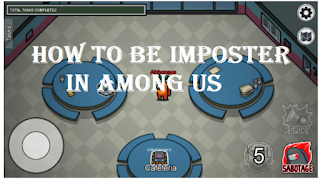 In this article, we will teach you to always play as the impostor in Among Us.

How To be the impostor in Among Us

Here's a quick guide on how to practice impostor role through a single player practice mode.

1. Select Free Play from the main menu.
You can choose from three maps: Skeld, Mira HQ, or Polus.
2. Go to the computer and click "Customize"
The computer can be found near its spawn point. It is usually near the emergency button.
3. Click on the red icon "Be_Impostor.exe"
This will turn you into an impostor! You can now use Sabotage abilities, kill a crewmate, or hide in Vents.

The Freeplay game mode is a single player practice mode where you can learn the mechanics of the game.  There will also be fictional teammates on the map so you can practice killing other players.  If you want to become a Crewmate again, just open the computer again and uncheck the Be_Impostor.exe icon.

How to have multiple imposters in a game

Many players don't know this, but you can actually have more than one Deceiver in a game!
To increase the chances of playing as an imposter, we highly recommend adding more imposters by changing the game settings.

You can do it through the computer in the lobby. If there is more than one Deceiver in the game, the Crewmates will have to deduct them and cast them all out.

Once an imposter dies, they will turn into a ghost viewer (similar to a dead crewmate). However, dead imposters can still perform sabotage.  You should definitely try playing with various Imposters, especially when playing with friends; It will result in more interesting (and longer) games, and everyone will have the opportunity to play as Impostor more often!

Freeplay mode is a great way to learn the skills of an imposter and practice your sabotage skills, especially if you are still a beginner at the game.

Don't worry if the game doesn't always pick you as an imposter, just keep playing it over and over again; your time will come and once it does, you must be prepared to defeat the entire team!