How to get mech in fortnite - BRUTE Mechs are back on the map in Fortnite Season 8, albeit in slightly nerfed 'recovered' form compared to previous versions. Here's how you can grab a Mech and blast your way to victory with a rocket.

Fortnite Season 8 is gearing up for its grand finale before Chapter 3 begins, but that hasn't stopped updates and new content from rolling in.

The recent patch 18.40 finally brought Naruto to the island and brought back the trusty shopping cart from Chapter 1. 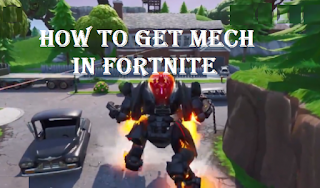 The biggest change, however, is the return of the BRUTE Mechs that terrorized the map in Season X. Here's how to get one in the game.

How to get a rescued Mech in Fortnite Season 8

While in Chapter X the Mechs randomly fell across the map, in Season 8 they work very differently. This time, they are only generated on Donation Boards that have met their goals.

These crowdfunding stations are similar to the Voting Boards that Epic recently introduced, only they ask for a donation of 50 gold bars rather than a vote between two points.

At the time of writing, there are two known boards on the map, but only one on the south side of Pleasant Park has been fully funded. The Mech now appears at the start of each match, so wait for a fight to get your hands on it. The other Donation Board can be found near Corny Crops, roughly at the "P" while looking at the map.

As we mentioned earlier, BRUTE Mechs have been reduced slightly from Chapter X. The shield that used to protect the player in the cockpit is no longer active, leaving them much more exposed.  Still, their massive size and fierce rockets make them a force to be reckoned with.

For more information on Fortnite Season 8, be sure to check out how to complete the latest Punchcard missions.