But it doesn't stop there. With the alien invasion, new types of chests also come into play. You can find "Cosmic Chests" during your gameplay on the map modified for Season 7. They are accompanied by flares of light and placed in sealed crystals. 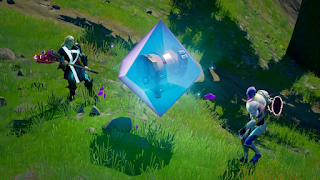 Among other things, you can find good weapons in the box. However, they weren't as easy as opening ordinary chests. You can find out how the cosmic chest works in our guide.

Also Read: Where The Black Helicopter that crashed in Fortnite?

This is the special thing about cosmic chests: To open cosmic chests, you have to use all your equipment. So you can find them in Duo, Trio or Squad mode.  If you have one of the chests in front of you, the crystal starts to show a weak point. You must alternately press these with your gathering tool. If you repeat this several times, the chest will open after a few hits.

It's in the cosmic chest: In the chest you'll usually find enough weapons for the whole team. So they're perfect if you need several good weapons at once.  They can contain different types of weapons, but they come with great rarity. From rifles to assault rifles, here you can get great weapons for your team. There may also be ammo, potions, and medicine cabinets.

Important: In addition to weapons, alien artifacts can be hidden in chests. You need it to adapt the Kymera skin from the Battle Pass. You can find more ways to get alien artifacts here in this guide.
Where can I find a cosmic chest? Basically chests can appear in various places on the map, even in open terrain. According to data from the "Hypex" data processor, they appear mainly during the first 3 zones of the match (via Twitter/Hypex).

Players have found chests in various locations. For example, they appear at the door of Steamy Stacks, west of Misty Meadows, or in the Pleasant Park area. However, this may vary from game to game.
How to find the cosmic chest? The advantage of cosmic chests is that they are marked on the HUD when you are nearby. If, for example, you're currently battling your way through a research station and a cosmic chest appears in the area, you'll know it through the marker. You just need to follow it.

Also Read: Where location of the alien artifacts from Week 3 fortnite

Another option is to bring one of the new UFOs with your team and use it to navigate the map. If you approach the cosmic chest, it will be marked. They are also easy to spot from the air when breeding in open terrain.

It's not just cosmic chests and alien artifacts that you need to collect in the new season. A new challenge leads you to a payphone quest in Fortnite.