How To Get the cube queen in fortnite -  With the arrival of season 8 of chapter 2 to Fortnite, many surprises came with this new stage. Positioned as one of the video games with the most users worldwide, the Epic Games title brings us the skin of The Queen of the Cube. Find out here what you must do to obtain it. 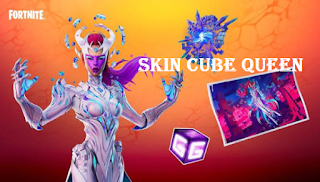 And is that, to make the appearance of the character, players must complete a series of challenges and missions. However, not only will this skin be obtained, but also other elements of the main series of this season. So what should be done?

Also Read: When will Naruto skin be released on fortnite

It is important to mention that, to obtain the appearance of The Queen of the Cube, you must possess the Battle Pass of Season 8 of Chapter 2 of Fortnite. The next thing will be to complete the objectives to complete the cards and thus win the character.

What are the missions to get the Queen of the Cube skin?

Divided into two parts, you must complete the five missions on page 1 to obtain the appearance of The Queen of the Cube. To get the Queen's Procession Hang Gliding Island Bane style, you can also meet the objectives on page 2.

Not only the skin, but you can also get the other accessories and different styles as long as you complete all the missions.