Skins Lara Croft In Fortnite Chapter 2 Season 6 - Fortnite new season has arrived today and many players have revealed some new features and lots of interesting items to smear in the game. 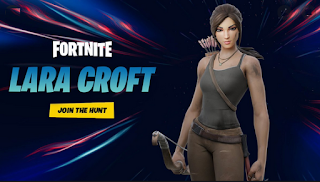 This skin, of course, will only be available in the sixth season of battle pass. So here's how to get Lara Croft's upcoming skin at Fortnite. Also read: NeymarJr in Fortnite Season 6, Have Special Skills?

How To Get Skins Lara Croft in Fortnite

For those of you who like the Tomb Raider saga, collecting Lara Croft skins is arguably an obligation because of course this skin is very exclusive for you to collect.
To unlock this skin, you only need to complete the mission and get an XP battle pass to unlock the Lara

Croft skin, so this skin will be a gift for those of you who have reached level 22 of the battle pass, according to information leaked by iFire Monkey via her Twitter account. 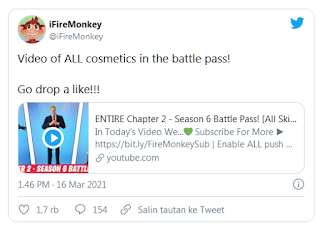 Players who use the free version of Fortnite Battle Pass, of course, won't be able to get this exclusive skin.

The Lara Croft skin itself will only be part of the premium version of the battle pass. Tomb Raider fans certainly need to spend their money to have the skin of their favorite archaeologist.

Meanwhile, Fortnite season six will also introduce many new features, such as many new locations on the map, new themes, more missions to do and a battle pass with 100 levels for you to complete during one season.

New weapons will of course also be released this season. Overall, you can expect a lot to discover the many new things Fortnite will be releasing for the upcoming season.