To celebrate the 75th anniversary of the NBA and NBA All-Star 2022, Fortnite players can access the NBA 75 All-Star Hub creative map created by the Atlas Creative team. There is a new series of quests for players to complete with three stages. 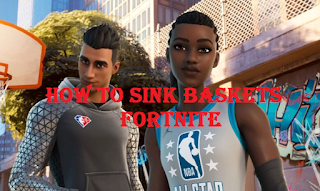 Essentially, players just need to sink baskets in the All-Star Hub, and they'll eventually be rewarded with XP and the High Hoops Spray. However, the thing is that some Fortnite players are having issues with the game not registering the marked hoops. There is a workaround that should help Fortnite players out, however.

If players head to Creative and enter the All-Star Hub through there, shooting baskets will not register in the mission info, but there is a quick fix to get it working. Instead of entering the creative map that Epic Games recommends, players must enter an Island Code in the Creative menu to access an alternate version of the NBA 75 All-Star hub.

Head to the creative menu and then go to Island Code. Fortnite players must put this code in the box and enter the Hub: 2165 – 0294 – 6080?v=3. There will be many different baskets to shoot balls at and they should have a red mark under them.

Once a ball is successfully thrown, the mark will turn green and the players progress towards the mission should now appear on the screen. Sink a total of 27 baskets to unlock the High Hoops Spray. It should appear once players return to the main screen. Fortnite menu screen, and can be equipped from there.

The NBA 75 All-Star Hub is available until 10 a.m. m. ET on February 23, 2022, so players have about a week to wrap up the challenge and get the Spray. The Hub not only has basketball courts, but there are also photo booths and seating areas to relax with friends online.

In addition to the new All-Star Hub, there's a new Fortnite Patch v19.30 that adds some quality of life improvements like gyro and stick controls, similar to Breath of the Wild's bow and arrow gyro controls.