How to tame wildlife in fortnite -  The Fortnite island will welcome new species in Chapter two, season six, called Primal. In addition to facing enemies, players will be able to hunt wildlife like in a survival game.

Hunting wild animals will have various uses. First, some challenges each week will require players to use mechanics to earn XP. This is the case of the first week of season six, for example, where there is a requirement to hunt five wild animals. 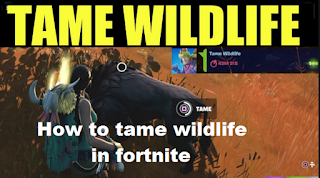 The mechanic can also be useful for looting craftable items, using the new gameplay mechanics introduced in Season 6. Once killed, they will also drop meat, which can be eaten and help regain valuable HP.

How to hunt wildlife in Fortnite Chapter two, season six?

With the new seasons, four species of wild animals have invaded the Fortnite island: wild boars, wolves, frogs and chickens.

Those animals can be found all over the map, but some areas will include more than certain species. For example, wild boars can be found in a meadow in Colossal Crops.

Animals will not try to defend themselves when you hunt them. Instead, prepare to run after them, because they will simply escape.

Also Read : How to get the shadow ruby ​​pack and items from the Street Shadow challenge pack in Fortnite

Although the animals can be hunted, they can also be tamed, which can give you an advantage. For example, taming chickens will allow you to use them to fly. Yes, now you can fly with chickens in Fortnite.