When will building be back in fortnite - Fortnite Chapter 3 Season 2 has shaken up the Battle Royale that dominates the world of Epic with a lot of new content. The new era comes with a Batte Bus load of new challenges to complete, as well as Marvel Doctor Strange and Prowler skins to unlock.

Despite all the new mechanics, like Tactical Sprint, it's actually a feature that has been removed from the game that has fans talking. 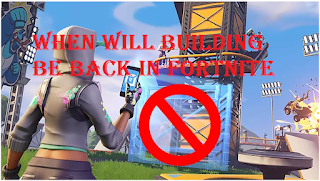 For the first time since the launch of Fortnite, the build is not found in the standard Battle Royale mode in the new season. But when can players expect the classic feature to return?

Also Read: Where to Omni Chips at Logjam Lumberyard in Fortnite Chapter 3 Season 2

For the first time since the launch of Fortnite, Epic has removed the building mechanic for the start of Chapter 3 Season 2. That means players must rely on existing cover found on the island, as well as their objective, to lead them to victory.

Thankfully, players aren't left totally defenseless, as the build has been replaced with Overshield, which will absorb some of the damage before enemy fire starts eating away at your health.

The build is still available in Competitive, Arena, Creative, and Team Rumble modes, but is absent from the standard Battle Royale mode.

When will construction return to Fortnite?

Based on this set of audio, it appears that the first 9 days of Chapter 3 – Season 2 will have build disabled, which explains why the no-build LTM supports bot lobbies. https://t.co/XwdAyHbOOE

Epic has yet to confirm when players will be able to build once again, but leaked information points toward a Tuesday, March 29 return.

According to in-game audio found by leaker iFireMonkey, the building removal will take nine days, after which the game will return to normal. The developers most likely made this temporary change to gauge community reaction to Fortnite without the ability to build coverage on the fly.

Building has always been a controversial feature in the game. Many fans have called for its removal to make Fortnite more accessible to new players, while others see it as an integral mechanic that separates it from Warzone and Apex Legends.

If the experiment is well received, don't be surprised to see a "no build" LTM or a separate Battle Royale playlist with the feature disabled in the near future.

For more on Fortnite Chapter 3, be sure to check out the player count in 2022, as well as how to fly with chickens.