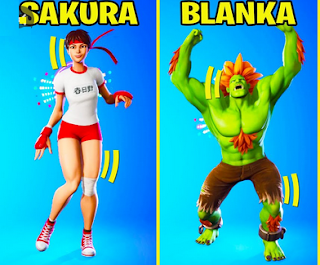 How to get Blanka and Sakura in Fortnite

Both Street Fighter character skins and cosmetics can be purchased from the Fortnite Item Shop starting April 28 at 8 PM PT. m. ET If Epic follows the old pricing structure for Street Fighter characters like they did with Ryu and Chun-Li, the packs will cost 2200 V-Bucks and the character skins alone will be 1600 V-Bucks. These prices have yet to be announced, but here's what similar skins and packs have cost in the past for similar content.

So if you're looking to get the Blanka and Sakura packs in Fortnite, you'll want to top up your V-Bucks before the skins release on April 28. To celebrate, there will be a mobile-only Blanka & Sakura Cup event. Not just dedicated to mobile, the all-platform version of Blanka and Sakura Cup will be available on PlayStation, Xbox, Switch, and PC (as well as mobile) and will be classified as a Solo Battle Royale event.