Damage opponent vehicles with the heavy sniper -  This guide offers tips on how to complete a Fortnite Season 5 Week 7 challenge that instructs players to damage opponents in vehicles.

Dealing damage to opponents is certainly not an unfamiliar concept in Fortnite, and is in fact the basis of one of the challenges for Week 7 of Season 5. More specifically, this new challenge instructs players to damage opponents in vehicles, and completing this task can be a bit difficult. That being said, Fortnite fans who use the tips outlined in this guide and practice a little patience should eventually be able to finish the challenge and receive their rewards. 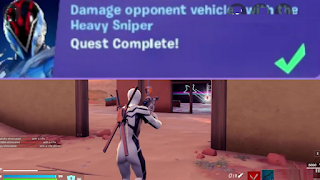 Before providing tips on how to complete this Fortnite Season 5 Week 7 Challenge, it's worth emphasizing that the exact task instruction is to deal damage to opponents who are in vehicles, not to use a vehicle to deal damage. While this will already be clear to some readers, it is a very important distinction for players to be aware of when attempting to tackle the challenge.

With that established, one way to approach this task is to get a weapon and camp on high ground in an area with a high density of vehicles, such as Lazy Lake, Pleasant Park, Retail Row, and Sweaty Sands.
In fact, zealots can keep an eye on a large number of parked cars from the tops of buildings in these areas, and must hold their positions until an enemy breaks into one of them. When that happens, players simply shoot towards the car to deal some damage and progress through the challenge.

Alternatively, fans can attempt to lure an opponent into the passenger seat of a vehicle in Fortnite and then jump in and shoot once the unsuspecting enemy has entered. Approaching an opponent and honking your horn is a way of signaling that he should come for a ride, although he certainly doesn't have to. While this may not be the most honorable approach to the challenge, it does give players a bit more agency than the method outlined above.

Also Read: Donate bars in fortnite, Where to donate bars when voting for construction projects in Fortnite Season 3

Keep in mind that there are plenty of other opportunities to earn XP in Fortnite at the time of this writing, and fans who find this challenge particularly frustrating may want to just pass it up. While this is something that players who are trying to reach the higher levels of the Battle Pass may be reluctant to do, the irritation this challenge can bring may simply not be worth the associated rewards. Instead, fans may be better off spending their time collecting Fortnite Season 5 Week 7 XP Coins and taking on other tasks.

Also Read: Hide in giant snowball fortnite || How to hide in a giant snow globe in Fortnite?