Darth vader in fortnite - Darth Vader's arrival in Fortnite gives players the chance to take on him in Battle Royale and loot his very own red lightsaber if you can beat him. This stylish weapon for a more civilized age is both fun and devastating in the right hands, but it's not easy to come by due to the fact that Darth Vader is, unsurprisingly, quite powerful in Fortnite! 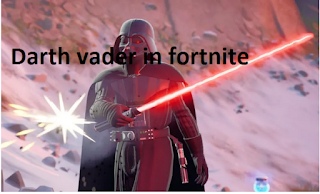 If you want to complete the Sith Lord look, be sure to unlock the Darth Vader skin and various other Star Wars Empire themed items that are available on the final page of the Fortnite Season 3 Battle Pass. Here's what you need to know about Fortnite Darth Vader, including where to find him and how to defeat him by lightsaber.

How to find Darth Vader Fortnite

Darth Vader and his Stormtroopers spawn in one spot at the start of every Fortnite match and stay there unless killed. When the Battle Bus starts flying over the Fortnite map, look for Darth Vader's white Lambda-class shuttle to fly up and follow where it goes. It's not hard to miss and will quickly land in an Imperial Docking Bay somewhere on the island, allowing you to either dive from the bus or land nearby and get there on foot. Keep an eye out for the blue beam of light that marks where you are after you've landed.

While the Imperial Stormtroopers are terrible marksmen in the movies, that doesn't mean you should just arrive at any Imperial site Vader is in without expecting a fight. We highly recommend landing at a nearby point of interest or landmark to scavenge for some loot, a solid weapon, and a few shields at the very least, before moving on to engage Vader. Also note that you will not find Darth Vader in any competitive modes of Fortnite.

How to beat Fortnite Darth Vader

Combine the Fortnite Grapple Gloves with Vader's Lightsaber to quickly get up close and personal with your enemies.

Now that you've armed yourself and are ready to take on the Sith Lord, approach the Imperial Docking Bay where Vader's shuttle is, and Vader and his Stormtroopers will quickly spot you. To defeat Darth Vader, you just need to shoot him a lot. He has a shield that needs to be broken and then you can start wearing his health down. 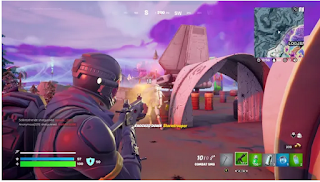 Note that although he moves slowly, his attacks are fast and brutal in some cases. You'll want to stay out of range of his lightsaber, but watch out for his saber throw and his Force attacks. It can also block a lot of your shots with ease, so make sure you don't waste too much ammo. However, he will make sure to drop after absorbing enough bullets, leaving his iconic red lightsaber behind for you to pick up. Use it up close or throw it to take down your enemies and get that Victory Royale.

While Vader is tough, Stormtroopers can also pose a bit of a threat. They are very much like the Fortnite IO guards from previous seasons and are pretty easy to take down. Shoot them all down and they'll be eliminated, leaving behind some loot and their Mythic E-11 Blasters. The E-11 is a good close to mid-range weapon that's especially useful for its infinite ammo, so it's worth picking one up alongside Darth Vader's lightsaber.

Also read: Chrome punk fortnite, How to dance with Chrome Punk in Fortnite