Harley Quinn boss fight Gotham Knights  - During Gamescom, it was announced that Gotham Knights would be out four days early, and we also saw a villain trailer revealing that Mr. Freeze, Clayface, and Harley Quinn would be among their bosses. After that, IGN posted a seven-minute video showing a boss fight with Harley, in which Nightwing leads her to free a group of people she mind-controls in a hospital.

This version of Harley has makeup that reminds me of Heath Ledger's Joker, only with what looks like a shovel drawn over her eyes. She's gotten rid of Jeanette Voerman's pigtails, but she's still sporting the traditional hammer and terrible jokes, calling her opponent "Nightbutt." Meanwhile, Nightwing is halfway to turning into a mullet, which you'd think would be a better target to taunt her with. 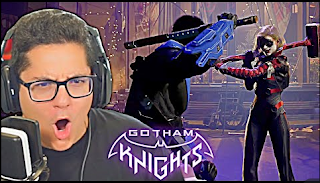 The last time we saw gameplay footage of Nightwing in action, there was a lot of skating to get him into position for attacks to land, which seems reduced here. At the same time, it seems slow and not particularly dynamic.

That could be because of how it's played, rather than letting Harley take hits, this footage is more about showing off Nightwing's moves, which include wrist guns that fire what are presumably rubber bullets and an ice stun. (Perhaps learned from Mr. Freeze?) He also dodges almost all attacks, which are telegraphed by circles around incoming weapons.

While that makes the fight seem trivially easy and a bit boring, checking out the comments makes it obvious why they've done it this way. On YouTube, the only thing that matters is proving you're good at gaming, so all the comments are rooting for the "skilliest player." Personally, I'd rather watch a video that makes the Gotham Knights boss fights look like a challenge rather than child's play, but what do I know.

It's impossible not to draw comparisons to the much more fluid free-flow combat of the Arkham games, with its counterattacks, dodging, and speed buildup as you build your combo. The Gotham Knights cooldown specials, as flashy as they are, one of them has Nightwing breakdancing while his staffs fly by themselves, they don't really compare. Dodges that leave Nightwing with his back to Harley like some cool guy who doesn't look at explosions aren't helping.

Still, perhaps increasing the difficulty to make the enemies faster and more aggressive will make the game more exciting. The more modifiable, the better. The developers have said that the damage numbers can be turned off, which is a good option. I'd love it if you could replace them with SFX that say BIFF and POW.