How to get hulkbuster in fortnite - Three weeks before the end of the current Fortnite Season 3, theories abound about the next episode of Epic Games' Battle Royale. The specialists in the video game are divided into two factions: some believe that the next season will be "the best of" the previous seasons, and others think that we will be entitled to another season with the Marvel label. 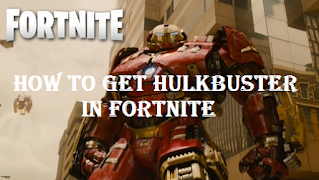 This weekend, data miners have put their finger on some interesting images from the Fortnite x Marvel comics. At various times in the comic we can see Iron Man's Hulkbuster armor, but with references to the suits of the Seven. Several leakers believe that these giant exo-armors will be the next controllable robots in Fortnite!

Also Read: How to get the wolverine claws in fortnite

A robot in the workshop

According to data miner Hypex, whose reputation is well known in the Fortnite ecosystem, Epic Games is working on a large robot capable of shooting, running, and blocking shots. Obviously, the developers haven't explicitly made a connection between this future XXL mecha and the Hulkbuster armor, but according to Hypex, the likelihood of Iron Man's Mark XLIV armor becoming the next playable robot is very high.

The Hulkbuster outfit was designed by Tony Stark to be able to fight the Hulk when needed. The little gem of technology really came in handy in Avengers: Age of Ultron, when the Hulk went on a rampage, threatening to demolish part of the city of Johannesburg.

Also Read: Fortnite Street Fighter, how to get Blanka and Sakura fortnite

It would be a good way to bring a new BRUTE to Fortnite, while also giving a nod to the Marvel franchises. In addition, it surely fits with She-Hulk, the latest series of Disney superheroes, and in which the good old Hulk appears.

Also Read: Where to find raptors in fortnite