Lebron fortnite skin - After a leak in May this year that revealed Epic Games' idea to include a LeBron James skin in Fortnite, this Monday, the news has paid off again in the gaming scene. That's because according to information from ShiinaBR and HYPEX, members of the gaming community known for leaks and battle royale information, the American basketball star will be the next star to receive a skin in Fortnite.

It is likely that the skin for the 6 Los Angeles Lakers jersey is likely to follow the same pattern as previously released: it will be released after a certain challenge created by Epic Games - the developer of Fortnite. In addition, as released in May by the American portal "The Verge", there is the possibility of LeBron James becoming part of the "Icon Series", as well as Neymar's skin. 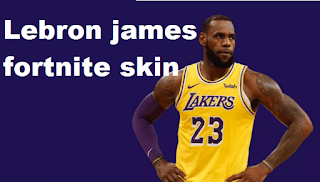 Curiosity, however, remains with the arrival of the skin of a possible athlete. In case of official confirmation, the customization will marry the release of "Space Jam: Um Novo Legado", a film that has LeBron's participation and is scheduled to premiere in Brazil on July 15. Soon, the basketball star skin may have a promotion for Fortnite and the movie.  Also Read: How To Get Skin Thanos in Fortnite
Next Post Previous Post
No Comment
Add Comment
comment url
Game