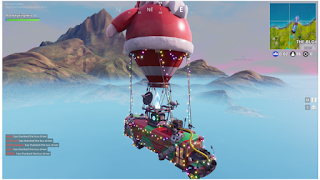 When you first start a game, you will be put on the Secret (or spawn) island for a short time while the game searches for 100 free players. Once you've found the players, you'll transport them all to the Battle Bus on the game map.

Also Read: Where is shanty town in fortnite

To thank the driver, you must be on the battle bus before jumping out of it to get into the game and press the "Thank the bus driver" button. This button is what you have configured for the emoticon wheel to appear.

For example, on PC, it's the B button by default, and on consoles, it's the down button on the D-Pad for PS4, Xbox One, and Nintendo Switch. Phone and tablet users can press the emoticon button in the upper right corner of the screen while inside the Battle Bus to thank the driver.

If you don't press this button before exiting the bus, you won't be able to thank the driver properly and you will have to start a new game to get it right.

You will know if you made it when a text box is displayed at the bottom left of the screen with your name, saying that you thanked the bus driver.