Launch toilets with a grab itron -  Fortnite's next batch of epic missions is here, and players can complete them to earn some extra XP for Season 7 Battle Pass. Fortnite's final season is all about aliens, invasions, UFOs, and other things related to space. 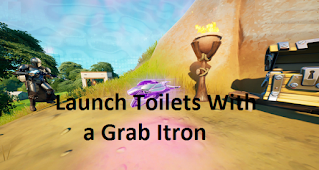 Many of the missions seem to revolve around the aliens that have inhabited the Fortnite island, such as one that requires players to find the new weapon called the Grab-itron and launch toilets with it. The intruders created this weapon, and they essentially call it a portable UFO, as players can use it to grab heavy objects and throw them at opponents.

Also Read: How To Get Ariana grande fortnite skin and release date

Being that the Grab-itron is quite a rare weapon in Fortnite, it won't be easy to find one without a bit of luck. They can be found inside chests, on top of hijackers, and inside the Mothership via the new low-gravity loot minigame. However, there are currently no hijackers on the map right now, except the one on top of The Aftermath. Because of this, players will simply have to search chests elsewhere.

A good place to look for chests is Fortnite Retail Row or Lazy Lake. These two locations have a lot of houses to search for loot, but players need to be careful as other players tend to land in these locations as well, especially since many missions involve going there.

Once players finally get their hands on the Grab-itron, they should now be on the lookout for some toilets. For the epic mission to be completed, players must use the weapon in two toilets and then throw them. Players should be able to find at least one bathroom in the houses scattered around Retail Row, Lazy Lake, or any other area with houses. They can be on the first floor or higher floors, it all depends on the size of the house.

Also Read: How To Plant tree in Cresta Ceppo or street food truck

From the outside looking in, the search is simple on its behalf, but actually finding the Grab-itron can take players quite a while if the RNG gods aren't on their side. If fans want an easier method of finding chests, they can always head to an IO base and search for IO Chests for a Recon Scanner, which shows the location of the chest when used.