Combat pistol fortnite -  A new fix for the v.18.30 update brought us a new weapon in Fortnite.How does it work? Where is it located new combat pistol of v18.30?

After players voted with their rods to fund the Combat Assault Rifle, a new variation of the Assault Rifle, Epic Games introduced a new Fortnite weapon, the Combat Pistol, which was made for the war against the Battle Cubes. season 8 of chapter 2. It arrives this November 9 within a new correction for the v.18.30 update of Battle Royale. 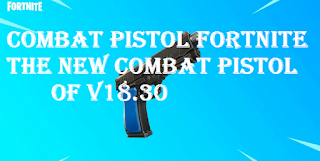 Like the Combat Assault Rifle, the Combat Pistol has low bullet spread and exceptional power. But this power is accompanied by a strong recoil, so you need to be experts to shoot at your full potential.

Where can it be found? Find the Combat Pistols on the Fortnite Island by fishing, in chests, and on the ground. The standard pistol was sent to the vault as the combat pistol was already distributed throughout the island.

Additionally, there was one more change within this new fix for the Battle Royale v.18.30 patch. The parallel rifle received some improvements. It now reaches its super powered state (that is, when it is "about to overheat") faster and has more precision. Find one and take advantage of these changes.

In other news, eight people were killed and more than 300 were injured during rapper Travis Scott's performance at a festival in Houston, Texas on November 5. What does this have to do with Fortnite? It is because of this fact, Epic Games has decided to remove Travis Scott's dance from the game store.