Travis scott removed from fortnite -  The move comes after multiple lawsuits were announced against Travis Scott.  An emote featuring music from one of Travis Scott's songs was removed from the Fortnite in-game store following the deadly concert that claimed the lives of eight people on Friday.

The Out West emote, which featured music samples from the Travis Scott and Jackboys song Out West, was removed from the Fortnite storefront along with all other items from the Daily section of the store. Fortnite Support made the rare move of confirming the section's removal and promised that it would be back during the "next Item Shop update." 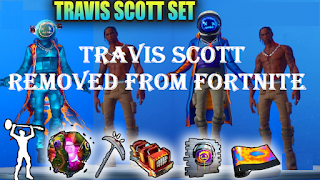 The emote itself has not been deactivated, so Fortnite players can still activate it in-game. They can also wear Travis Scott's skin.

Travis Scott has been criticized for continuing his prepared Astroworld Festival for 37 minutes as the crowd crowded below him, resulting in eight deaths and dozens more injured. Scott reportedly stopped his performance several times to direct security to help distraught concertgoers, but did not end his performance until much later.

For his part, Travis said in a video on Instagram that he was unaware of the seriousness of the situation and if he had known he would have stopped the show. He is also working with fire authorities and police to investigate the cause of the increased crowds.

The exact cause of the increase is still unknown. Several concert goers passed out near the front of the crowd, which may have caused panic in those further back. According to TMZ, both Scott and Live Nation face multiple lawsuits from injured parties for failing to provide adequate security to ensure the safety of attendees.

Travis Scott has been in Fortnite since his successful astronomical concert tour last year. That tour earned the rapper $ 20 million with 12.3 million Fortnite players watching the performance. Players can also purchase a Travis Scott outfit to make his avatar look like the rapper.