How to set structures on fire in fortnite -  Here's how to set fire to structures as part of Ember's Punchcard in Fortnite Chapter 2, Season 8. 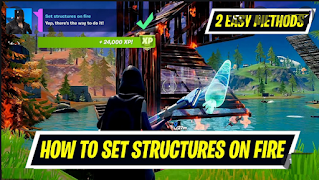 A new NPC Punchcard was released in Fortnite yesterday. Ember can be found wandering the Scenic Spot, so if you haven't checked out the quest line yet, head over there and pick her up. The first mission will assign you the task of destroying a chimney, which we have conveniently detailed. The second task Ember has for players is a good old-fashioned arson; Players will have to set fire to some structures.

How to set fire to structures in Fortnite

This quest requires a bit of work, so we've broken down what you need to do to complete it.

After collecting all 10 jars, head to the closest structures you can find. The large Weeping Woods building will do just fine. From here, all you have to do is throw a jar at 10 different structures and set them on fire.

Once ten structures have burned down, the mission will be complete and players will get 30,000 XP for their troubles.