Where Location of Rivers of Blood Katana in the Elden Ring

To acquire the Rivers of Blood Katana in Elden Ring, you need to progress to the Mountaintops of the Giants region. This region is pretty close to the end of the game's main story. 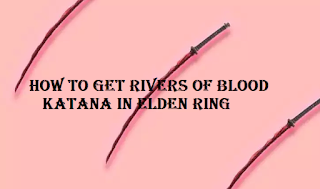 Also Read: How to get to mountaintops of the giants Elden Ring

Once in this region, you have to pass the frozen lake and head to the Church of Rest to the south. Once here, you will come face to face with Okina, an NPC. You have to fight and defeat said NPC, after which you will receive the Rivers of Blood Katana.

You can keep everything else at the Base level. These stats are preferably for a player with a level of 150. However, if you are below level 150, you can feel free to reduce some Spirit and Stamina points. Doing so will keep your Dexterity high.

So there you have it. This is pretty much everything you need to know about the best Rivers of Blood Katana building guide in Elden Ring. Considering how powerful this weapon is, you'll find yourself effortlessly battling enemies with just a few clicks. The Katana's stats make it seem almost too good to be true, to the point of feeling like the weapon is a bit too powerful for the game.