When is ipados 16 coming out - It's understandable to be excited about the iOS 16 release date, with fun new features coming to iPhone, like a customizable lock screen with widgets, the ability to edit sent iMessages, new Safari tab grouping features, new features from the iCloud Photo Library and more. And similarly, you may be excited to have iPadOS 16 on an iPad with the new Stage Manager multitasking feature.

So when is iOS 16 coming out for iPhone for everyone else? When does the beta end? And when is the release date of iPadOS 16 for iPad? 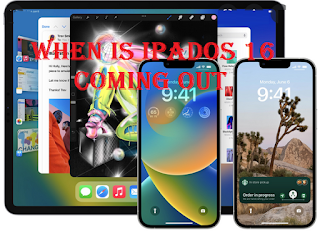 iOS 16 for iPhone and iPadOS 16 for iPad are currently in beta, which means they are in active development. These beta versions are available for developers and public beta testers for the curious and adventurous. Due to the nature of beta system software, only advanced users should play beta software.

Apple has publicly said that the iOS 16 release date will be in the fall of 2022. It's a bit of a vague timeline, but the fall starts on September 22 of this year.

Apple usually releases new versions of iOS shortly after announcing a new iPhone, which has been in mid to late September lately.

Also Read: How to clear cache in iphone

This gives us a clue as to when the iOS 16 release date will actually be, and it would be reasonable to expect iOS 16 to be released to the general public in late September to early fall. or maybe early October.

If you're curious about whether or not you'll be able to run the version when it's available, check out the list of iPhone models compatible with iOS 16.

iPadOS 16 release date is later in the fall

Apple typically releases iPadOS at the same time as iOS, but this year may be different, according to a new report from Bloomberg.

According to Bloomberg, Apple will delay the release of iPadOS 16 by about a month from iOS 16, which is likely to coincide with the release of macOS Ventura 13 for Mac.

This puts the iPadOS 16 release date sometime in October, most likely.

If you're not sure if your iPad will be able to run the latest system software when it becomes available, be sure to check out the list of iPad models that support iPadOS 16 here.

Also Read: How To Cancel Netflix on iPhone and Android

I don't want to wait for the fall release dates, I want to get iOS 16/iPadOS 16 right now!

It's completely up to you, but most users should just wait until the final version is available for their device this fall.

Also Read: How To Shut Down or Restart iPhone 12 or iPhone 12 Pro