Fortnite where to find birthday presents - Fortnite is currently celebrating its fifth birthday, and players can join the festivities by working on their birthday quests. These missions instruct fans to perform a variety of actions, and they'll need to throw birthday presents and consume birthday cake in different matches before all is said and done. 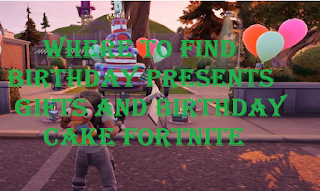 In order to complete those two quests, players need to know where to find the Birthday Presents and Birthday Cake in Fortnite Season 4, and this guide is here to point them in the right direction.

Birthday Presents will drop as floor loot during the Fortnite 5th Birthday event, and therefore players are advised to focus their searches on locations with an abundance of that type of loot source. While most of the named locations fit that description, Rocky Reels, Synapse Station, and Chonker's Speedway are some of the best places to look for birthday gifts, and fans should plan on landing at them at the start of a match.

Also Read: Where are mending machines in fortnite

To note, birthday gifts are of legendary rarity, which means fans who are working this quest should be looking for orange items. Thankfully, these items don't seem to appear as frequently as a typical legendary weapon in Fortnite, and fans should find them with some regularity. When a player finally finds a birthday present, they must pick it up, throw it the same way they would deploy any other throwable item, and then collect the loot inside.

Birthday cakes can be found in many of the named locations that are scattered across the Fortnite map and take the form of a large cake surrounded by smaller slices. While fans are likely to find birthday cakes while searching for gifts and generally participating in their matches, here's a map that highlights a few positions where the dessert may appear: 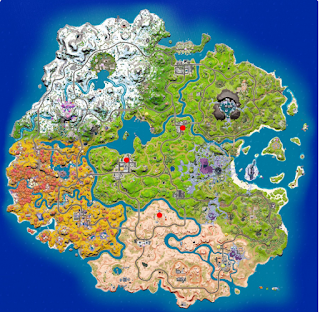 As a quick point of emphasis, the birthday cake quest requires the treat to be consumed in different matches. This means that players will need to join at least five matches to complete this quest, though they can always exit their matches after consuming some cake if they want to speed things up.

Also Read: How to cancel fortnite crew on ps4

However, there's certainly no shortage of activities to take part in in Fortnite Chapter 3 Season 4, and fans may want to check their quest logs before leaving a match.