How to get Free Skins Deathstroke in Fortnite - Deathstroke skin has been confirmed by Epic Games, and every Fortnite player has the opportunity to get it for free at the Battle Royale event. Take care that you take advantage of the offer and thus show off in the game. 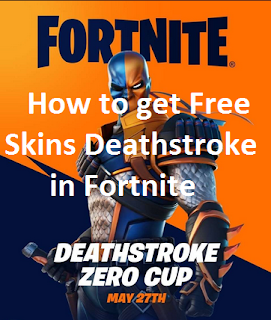 Also Read: Where are all the cosmic chests in fortnite

Scheduled for release on May 27, Deathstroke's Katanas will serve as a back-bling and pickaxe in Fortnite. The katana is included as part of the Deathstroke Zero Outfit in Fortnite, meaning that players don't have to perform additional tasks to claim it.

Taking these factors into account, the first method available for players to claim skins is by participating in events and meeting the criteria necessary to unlock outfits. However, players who missed this skin for free will be able to buy it from the Store starting June 1.

Also Read: How to get the shadow ruby ​​pack and items from the Street Shadow challenge pack in Fortnite

After months of speculation and rumors about the protagonist of DC Comics' arrival at Fortnite, Epic Games has finally confirmed the final version of the Deathstroke Zero outfit. We haven't seen the skin design in action yet.