elden ring miranda the blighted bloom -   Elden Ring players who wish to get their hands on the Viridian Amber Medallion, a talisman capable of increasing your character's maximum stamina, will inevitably have to defeat Miranda, The Blighted Bloom, the boss of the Tombsward Cave area, located in Weeping Peninsula. . With that said, and to help anyone struggling to defeat the boss and claim the stamina-enhancing talisman, here's how to defeat Miranda, The Withered Flower in Elden Ring. 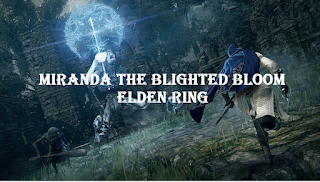 Before facing the Elden Ring boss, we recommend equipping some Neutralizing Bolos, a set of high magic and poison resistance armor, and activating Godrick's Great Rune if possible, which will also increase your resistance against the two poison clouds.

That the boss will leave. and the magic attacks from him. It is also recommended to equip a Flask of Wondrous Physick with Crimsonburst Crystal Tear, as its effect will counter some of the poison damage.

That said, once the Tombsward Cave fight begins, you'll find yourself facing the boss and his minions in a tight space, making sure you're not affected by the bosses' poison buildup. To counter this, equip your most powerful weapon, infuse Fire Grease if possible, then focus on dealing as much damage as possible in quick succession, because time will be an enemy this time as well.

To speed up the process, it is recommended to use a summon Ashes capable of dealing massive damage, such as Mimic Tear Ashes or Black Knife Tiche Ashes, as the summon will engage enemies while dealing damage with low risk and using consumables. stay alive. The boss will also be able to fire magic projectiles at your position, so he tries to keep you mobile while dealing damage.

Also Read: Where to go after morgott Elden Ring