How To locate a lost iPhone, iPad or Apple Watch with Siri -  Misplacing an iPhone, iPad, or Apple Watch can be infuriating, especially if you're sure it's somewhere, but can't get your hands on it. If you have Find My iPhone / iPad / Apple Watch active, ask Siri to find it for you. 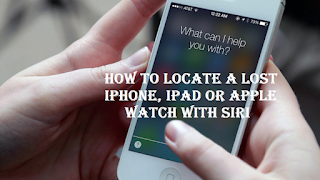 You're probably already aware that you can find an iPhone, iPad, or Apple Watch using the Find My iPhone app, but there's a cooler, more friction-free way to do it. Asking Siri to "find my iPhone" or another device is a quick way to do just that, and Siri can even initiate a ping to the missing device, making it easy to search.

Things get even better if you also have a HomePod, because you can ask it to do everything as you would any other Siri-toting device. There's something magical about yelling at a HomePod and making your iPhone ping like crazy from behind the couch cushion.

How To find a lost iPhone, iPad or Apple Watch with Siri

For this to work, you will need to have Find my iPhone / iPad / Apple Watch enabled during setup. Assuming you did, here's how to find any of those devices with your voice, thanks to Siri.
To get the ball rolling, invoke Siri as you normally would and then ask her to “Find my x” and replace x with the device you are looking for.
"Find my iphone."
"Find my iPad."
"Find my Apple Watch."
Say "Yes" to initiate a ping.
If you have multiple devices, like two iPads, for example, Siri will ask you to confirm which one you want to locate. If you have multiple family members, you can even ask Siri to search for your device as well. Just add your name to the application; "Find Rachel's iPhone" will make Siri do exactly that.
Say "Yes" to initiate a ping.
Once Siri has identified the device you want to locate, it will ask you to play a sound. Answer "Yes" to initiate the ping.
Once the ping has started, your device will begin to beep. This will continue until it is canceled on the device itself, or eventually times out.
Press "OK" to dismiss ping.

Also Read: How To Measure Height With Iphone

Of course, if you are sure that your lost device is somewhere nearby and you have Siri set to respond to a voice command, you can also try speaking to her directly. Just say something like "Hey Siri, tell me a joke" to get it to start making noise.