Talking about Xiaomi, Xiaomi is one of the most well-known smartphone brands in Indonesia and of course in the world as well. Because this smartphone brand originating from China is indeed global thanks to the latest launches of smartphone devices.

Although Xiaomi itself is not only a smartphone, but this brand is famous for its smartphone products. The latest smartphone made by Xiaomi is indeed eagerly awaited by its fans.

Xiaomi smartphones are quite popular because of their pretty good specifications and supported by a body that looks cool. Even so, Xiaomi cellphones still have quite affordable prices compared to other brands with almost the same specifications.

Also Read: How to share your Xiaomi screen on TV

Because the Smartphone made by Xiaomi is good and at an affordable price, making this device a lot of fans. Especially for the Indonesian market, where Xiaomi devices are mostly in the interest of teenagers. 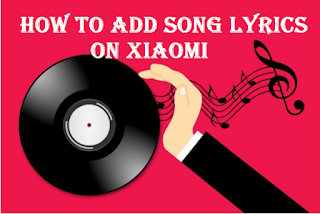 In addition to a cool body appearance. Xiaomi also has its own look inside the device. Where Xiaomi wraps its OS display with MIUI, which is where the OS display becomes very cool and popular with users.

The drawback is that it displays song lyrics. Although the default music application is actually able to display song lyrics, users need to know how to display it.

Because if you just play the song in the default music application, the lyrics of the song will not be displayed. And for a complete way of displaying song lyrics on Xiaomi as follows.

How to add song lyrics on Xiaomi mobile

The following way to add song lyrics to the default music player and not third-party applications downloaded on playstore.

Xiaomi's default music application already supports displaying song lyrics. However, usually the downloaded songs are not yet in a package with the lyrics. So we need to add our own song lyrics to the Xiaomi HP music player.